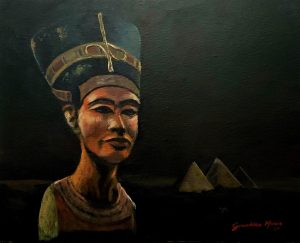 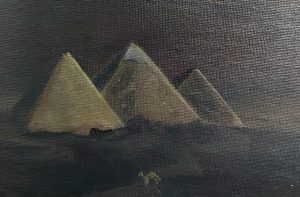 Looted art
When I was in Berlin, I visited the Neues Museum where I was mesmerised by the beautiful bust of queen Nefertiti. She was the wife of the great pharao Akhnaten. 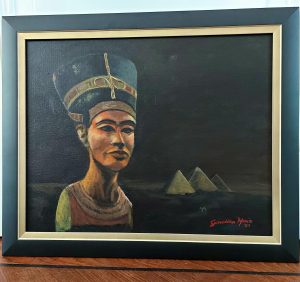 The work is believed to have been crafted in 1345 B.C. by Thutmosis because it was found in his workshop in Amarna, Egypt. A German archaeological team led by Ludwig Borchardt discovered the bust in 1912 in Thutmosis’ workshop. It has been kept at various locations in Germany since its discovery, including the cellar of a bank and a salt-mine.
She can now be seen at the Neues Museum in Berlin, in a dark room, on her own. When I saw her in that room, I was moved by feelings of sadness and loneliness. I instantly felt she didn’t belong in that place: she belongs in Egypt, where she reigned next to her husband. Since that moment, I imagine how she may be longing for and dreaming of her country of origin. So that is what this work is about.
I think it was a mistake to take her to Germany and that she should be returned to Egypt. I honestly believe that archeological finds have their home in the country of origin and should be preserved and exhibited in that country.