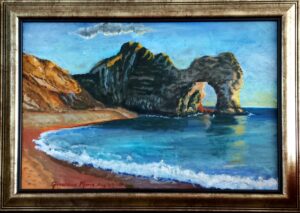 I painted this because this rock is a spectacular place on the South coast of England (Dorset, Lulworth Cove). It depicts a realistic view of the typical Jurassic rock formation, the limestone archway, formed by waves crashing against it for millions of years.
I lived in Bournemouth for many years and on our way to Dorchester and Weymouth, we often visited Durdle Door. I loved it and I still do.
After the first one, I decided to paint a second one, which I feel is more me.