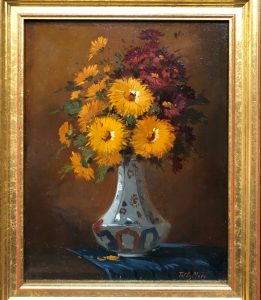 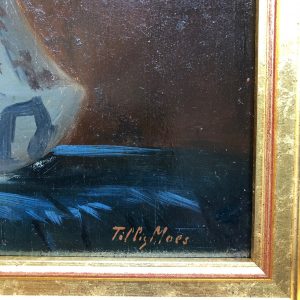 Tilly Moes (1899-1979) was the pseudonym of a very productive Dutch painter. She is known for her flower still lifes, which were very sought after in her days. But she also made the occasional portraits, for instance of her sister Nel.

Life and work
She was born as Sofia (Fia) Theodora van Driel in Düsseldorf on 25-9-1899. She was the daughter of Johannes Gerardus van Driel and Sophia Adriana van Lammeren. Her parents moved to Den Haag, were she lived and worked until she got married. Her early works are mainly made in dark tones.
In 1927 she married painter Nico Bruijnesteijn, whom she probably met at the Academy. After the wedding the couple moved to the Gooi area, where they lived in several places including the well known painter’s village of Laren, but they also visited Antwerp and Romania. They were both painters but Fia was the better one, so Nico took it upon him to travel around The Netherlands in order to sell their work. They were proud that they could live of their work, especcially after their son was born in 1931. Even in the difficult crisis of the thirties, they managed to live of her work.
In 1939 they settled in Den Haag, where her flower still lifes were a great success. Unfortunately, in 1942, their house was summoned by the Germans and they had to move again, to Zeist this time. In Zeist she also painted flower still lifes under her own name: Fia van Driel. After the death of her husband in 1950, Fia continued to sell her paintings. Many of these roughly 1400 pieces were shipped to te USA by Jack Alden, a former art dealer from Amsterdam who had survived the concentration camp and had moved to the States after WW2.
When her son accepted a job in Arnhem, she moved to this city with him to live and work here. After 1970, her eyesight deteriorated, preventing her from painting. After an operation on both eyes in 1972 she was so thrilled to see better that she made one more painting, for her son. Shortly after her 80th birtday, she died on 7th October 1979, in an Arnhem hospital.