Thérèse Schwartze was a famous portrait painter in the late 19th century, early 20th. Most portraits were commissioned by the elite of Amsterdam. 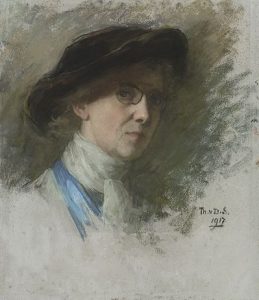 Life & work
Thérèse was born in Amsterdam on 20th December 1851. She was the daughter of a portrait painter Johan Georg Schwartze, who grew up in Philadelphia and trained in Düsseldorf and Maria Elisabeth Therese Herrmann (1822-1896). She had one brother, Georg, and sister Ida and Georgine, who became a sculptor.
Thérèse’s first known work was a portrait of two boys which she painted when she was 15 years old, in 1866, Ernst en Louis van Loon.
When her father died in 1874 she went to Munich where she stayed for one year to work on her technique. On coming back to Amsterdam she became the provider for the family. She was one of the very few women who could make a living by painting. In the eighties of the 19th century, she discovered charcoal and pastels and she was delighted about the speed in which she could work with these materials. The quality of her pastel portraits was recognised even by her critics.
In the same eighties she gave painting lessons to Maria von Pruissen, sister-in-law of King Willem III, in the Royal Palace of Soestdijk. Soon after this, she received her first royal commission in 1881: she painted queen Emma with the little princess Wilhelmina on her arm. 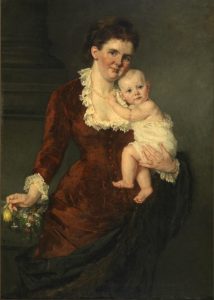 Thérèse Schwartze
Queen Emma with crown princess Wilhelmina on her arm
Oil on canvas
146 x 98 cm
Foundation of historic collections of the House of Orange-Nassau.

In 1884 she went back to Paris, this time together with her friend and colleague painter Wally Moes. They studied together and painted many so-called ‘Italian models’ and she became acquainted with Impressionism and outdoor painting (en plein air), but working outdoors was not for her, Thérèse preferred her studio. She did however develop her style, using elements of impressionism. This was mainly the case for elements that did not concern the face of her clients. The way she handled backgrounds and expressed materials became more impressionistic.
She was a good friend of the Amsterdamse Joffers, a group of female painters that had formed a collective. She organised afternoons for them, with tea, while they discussed their work together.
In 1897 she received an important royal commission for the innauguration portrait of the young Queen Wilhelmina; and many more. She was the first woman to be elevated to the rank of Knight in the Order of Orange Nassau, by Queen Emma (1896). This continuous influx of commissions enabled her to purchase a second house, next to her own on the Prinsengracht 1089-1091. She was not the kind of painter who would work solitarily in her studio in order to express her feelings – she had a business to run in painting portraits of royalty and the Amsterdam high society – she worked hard and she was good at it. 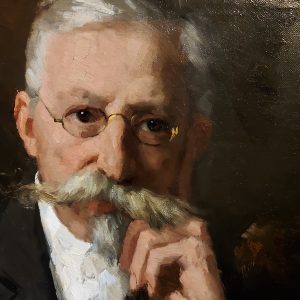 After she married Anton G.C. van Duyl in 1906 – with whom she had a long lasting love affair since 1880) she signed her work ‘Th. van Duyl-Schwartze’. Since the eighties of the 19th century she had a secret relationship with Anton van Duyl. This is why she remained childless; she spent a large part of her life waiting for her love to be ‘free’. After his wife died, they married in 1906.

She worked right up to her death. When her husband died in the summer of 1918, she was devastated. Soon after that she contracted Spanish Flu in the epidemic, and according to Art hisorian Cora Holleman in her great book on Thérèse Schwartze, she died of a subsequent myocarditis (inflammation of the heart muscle) which she tried to ignore. This was on December 23rd 1918 when she was 67 years old. Thérèse Schwartze now lies buried in Amsterdam, at the Nieuwe Ooster cemetery in Amsterdam, where her sister created a memorial for her, modelled after her death mask, which is now considered a state_monument.
In Amsterdam a square was named after her, but after her death she was lost in obscurity for a while as people forgot her name. But she re-emerged into the light in the late 20th and early 21st century. You can read my review of her solo-exhibition in Delft (March-May 2022).

Professional education
Before studying for a year at the Rijksacademie van Beeldende Kunsten in Amsterdam, she received most of her basic training from her father – from a young age. After her father’s death, when she was 23, she travelled to Munich and studied under Gabriel Max and Franz von Lenbach. In 1879 she went to Paris to continue studies under Jean-Jacques Henner. When she returned to Amsterdam she became a member of Arti et Amicitiae. She also became a member of the Dutch Etching Club.

Exhibitions (highlights only)
1878 – Exibited her work at Arti et Amicitiae, Amsterdam.
1879 – Exibited at the Salon de la Société des Artistes in Paris.
1884 – Exhibited at the Salon in Paris.
1893 – Exhibited at the Palace of Fine Arts at the 1893 World’s Columbian Exposition in Chicago.
1898 – Exhibited at the Dutch National Exhibition of Women’s Labour, The Hague.
Later she became either a member of the Jury or Organising Committee of several national and international exhibitions.
Cora Hollema’s exquisite book ‘Thérèse Schwartze, Painting for a Living’ presents a complete list of national and international exhibitions & awards (p. 190). 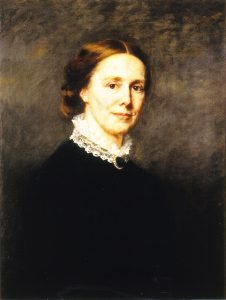 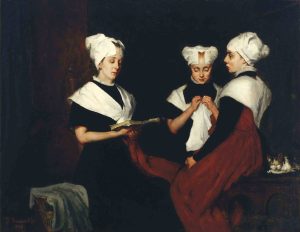 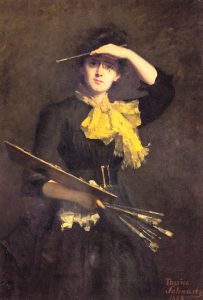 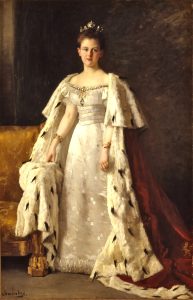 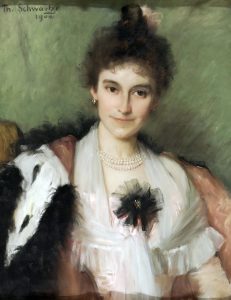