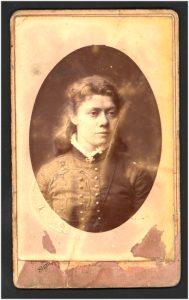 Suze Robertson (1855-1922) was a Dutch painter who depicted the peasant life and social hardships, just like Vincent van Gogh in his Brabant days. At the time she was considered as his equal. Professor August Allebé, director of the Amsterdam Academy of Visual Arts said at the end of the 19th century: ‘The paintings of Suze Robertson seem to have been painted by a woman protesting, really emotional, by bravery.’ And somewhat later Charley Toorop called her ‘the most important woman painter of the 19th century.’

Her works of simple people in farm interiors and rough scenes of farm life are reminiscent of Van Gogh’s early The Potato Eaters and it is said they admired each other’s work.

Life and work
Suze was born on 17th December 1855 in The Hague, as the youngest in a family with nine children. Her father was of Scottish descent. Her mother died when she was two and she was raised by her aunt and uncle, who sent her to boarding school of Elise van Calcar in Wassenaaer (near The Hague). Doubting whether to choose a carreer in music or painting, she chose the latter. When she was studying in The Hague, her peers were a.o. George Hendrik Breitner and Willem de Zwart who studied at the same academy. All through her student years she fought for the rights of females to have the same quality of education as the male students, including studies of the naked body, which at the time was considered inappropriate for women. In Rotterdam, this caused quite a scandal. During her last few years as an evening student in Amsterdam, she earned her living by giving drawing lessons at a girls secondary school. At the Academy in Amsterdam, she was told to focus on flower still lifes, but she rebelled and was soon allowed to work with models.
When she finished her education she moved South to work in several villages in Noord-Brabant (Southern province in The Netherlands).
in 1892 she married Richard Bisschop, a Dutch painter of church interiors. After the birth of their daughter Sara, they settled in the Noord-Brabant village Leur (now Etten-Leur) where they raised their daughter. From 1895-1898 they lived in a house owned by Henkrik Dolk, the co-director of a sugar factory, in exchange for drawing lessons. In this period Suze painted some remarkable portraits of their nanny Petronella (‘Pietje’) Prins. Until her daughter was nine, she combined motherhood with painting. Sara was sent to boarding family and Suze Robertson took up her art with renewed energy. The years from 1900 onwards were her most productive.
Apart from Etten-Leur, she also worked in Dongen, and Gooi Region (Blaricum, Laren), Harderwijk, Katwijk and other places.
She developed a unique, quite expressive stile of her own. Her palet is rather dark and she liked the earth colours. She used a broad and strong stroke of the brush as well as often dark lines. Her work – often interiors with women and children doing their daily work – projects a certain melancholy. Her paintings give evidence of hard work, poverty and hardship.
She died in The Hague on the 18th October 1922. 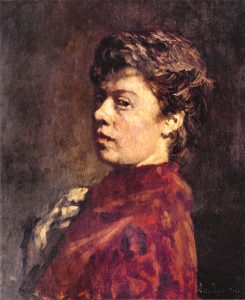 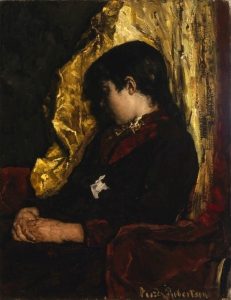 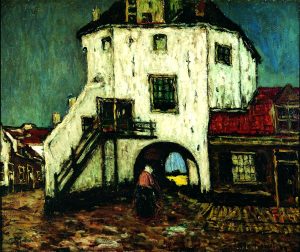 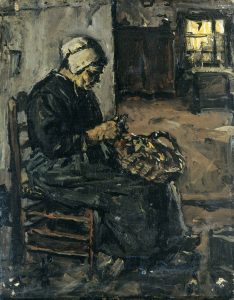 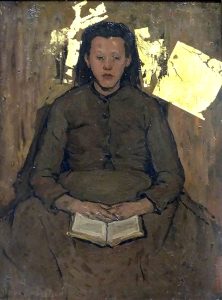 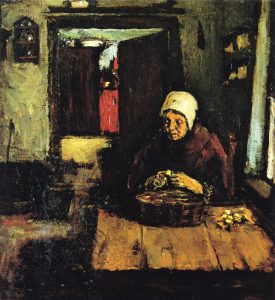