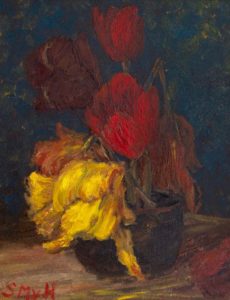 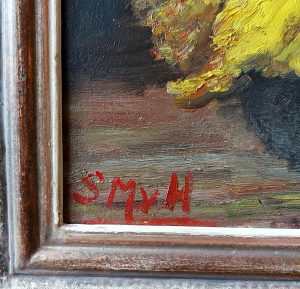 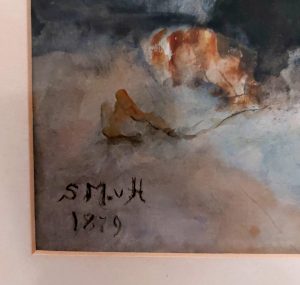 Education
In 1870, Sientje took drawing lessons from the Den Haag painter Johannes C. d’Arnaud Gerkens, who remained her only professional teacher. She did not attend any art school, instead she worked hard and studied together with her husband, Hendrik Willem Mesdag, thus mastering the craft and art on her own. She said: ‘I learnt a lot by studying nature and seeing the works of the great masters.’ 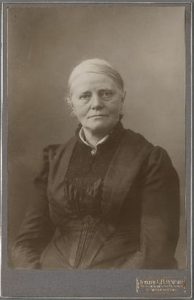 Life and work
Sina (Sientje) van Houten was the eldest daughter of Derk van Houten (1810-1864) and Barbara Elisabeth Meihuizen (1809-1856). She spent most of her youth in Groningen, Damsterdiep 215, a house that still exists. Although she came from a well to do family with a broad cultural interest, the visual arts were not part of her upbringing. But together with her father she visited exhibitions and art lectures in Groningen. In her younger years, she was probably not aware of her artistic talents.

When she was nearly 20 years of age, in 1854, she got engaged to Hendrik Willem Mesdag, son of a Groningen corn merchant, very much in accordance with her parents’ wishes. The art-loving Mesdag family was important for her artistic development.

They married on 23rd April 1856. She was 21 and Hendrik Willem Mesdag was then 25 years of age and working as a stockbroker in his father’s firm Mesdag & Sons in Groningen. Although he was successful in his trade, Sientje saw his talent and love for painting and encouraged him to follow that path. In 1862 their son Klaas was born.
Two years later (thanks to an inheritance from Sientje’s father), in 1866, the young family left Groningen to live and study in Brussels, which was a booming artistic city in those days. Their address, Rue van de Weyer 70, became a meeting place for many painters like Laurens Alma Tadema, Willem Roelofs, P. Gabriël. During this period, quite inspired by the ‘Barbizon School’ of painters that started to work ‘en-plein-air’, they spent their summers in Oosterbeek, where they also met painters like Anton Mauve, Van Trigt, and others with whom Sientje and Hendrik made several studies of nature. Sientje accompanied Hendrik when he visited other painters and studied together with him.

After a holiday on the German isle of Norderney in 1868, Hendrik became so impressed by the sea, that the couple decided to move to Den Haag, close to the sea and an art academy. Hendrik focussed on painting seascapes and maritime pieces. Sientje ran the household and tried to work as much as she could, on seascapes, nature, still lifes, and portraits.

Unfortunately, in 1871, their son Klaas died of diphtheria when he was 8 years old. In order to deal with her grief, Sientje engaged fully in painting and never stopped until she died in 1909. In order to both have a working studio and to give room for their collection of paintings, the couple moved to a larger house on the Laan van Meerdervoort (nr. 9 & 11). She painted nature in its ever changing moods, portraits, still lifes and she shelped her husband paint the world famous ‘Panorama Mesdag’ which can still be visited in Den Haag. In this panorama, Hendrik Willem honoured his wife’s art, by depicting her in the painting – she can be seen sitting on the beach, working at her easle.

From 1872 she exhibited her work in in the ‘Tentoonstelling van de Levende Meesters’ (Exhibition of Living Masters) and many others. She was very humble about her own work, and she wasn’t easily satisfied with the results: ‘I have little confidence in what I make.’ However, thanks to her willingness to learn, her stamina and determination, she succeeded in reaching the results she was aiming for. In the beginning her work was quite realistic; during the years, especially from 1880 onwards, her style definitely developed. Her touch became more loose and impressionist and she dared to insert greater contrasts between light and dark. She became a patient tutor to others.

The art critics liked her work; they praised her landscapes and still lifes, her use of colours, her simplicity and originality. Her professional colleagues admired her, not only for being a ‘nice person’, but also for her art. Haagse School painter Jozef Israëls said about her: ‘She is a woman of high standing, she is more intelligent than most men and knows a lot more about the important issues than they do.’ In her days she was seen as a ‘fine artist’ and ‘a wise woman’.

She was also a very social person, as a member of many art societies, (e.g. Pulchri Studio), she and her husband received many artists at home, discussing each other’s work.
Although she was known to be ‘the wife of’, she insisted on being a painter in her own right. Although her husband always supported and promoted her work, she managed to organise her own affairs regarding exhibitions and sales. Both of them took pleasure in collecting paintings and other art, which can now be seen in the ‘Mesdag Collection’ in Den Haag.

Sientje Mesdag-van Houten died on 20th March 1909, when she was 74 years old. After her death she was less well remembered than her husband, the sea painter, but during her life she was equally famous.

Prizes and Awards
1889 – Gold medal at the Exhibition of Levende Meesters, for Dune landscape behind Plantlust.
1896 – Bronze medal at Paris Exposition Universelle, for Huts at sunset and Heather near Ede.
1903 – Bronze medal at an international exhibition in Paris.
1904 – on her 70st birthday she was awarded a medal of Officer in the Order of Oranje Nassau, in order to honour her contribution to the Dutch painting art and for donating the collection to the State of the Netherlands.

Exhibitions and Museums
1893 – She exhibited her work at the Palace of Fine Arts at the World’s Columbian Exposition in Chicago.
1902 – her work Rentrée du troupeau was bought by the Italian King Humbert, at an exhibition in Venice.
1904 – Exhibition of Honour by Pulchi Studio in Den Haag
Between 1870 and 1992 her work was exhibited in numerous (> 150) exhibitions in Den Haag, Rotterdam, Groningen, Amsterdam, Arnhem, Dordrecht, Antwerp, New York, Paris, Vienna, St. Louis (USA), Liège, Rome, Pretoria and London.
Her work can be seen in Dutch museums: Panorama Mesdag & Mesdag Collectie, Den Haag; Museum Tromp’s Huys, Ameland. Most of her paintings went to private collections.