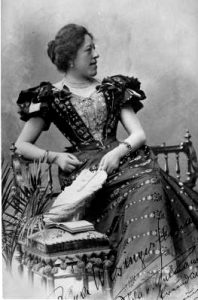 Professional education
Olga began private art lessons at age 19. Frustrated with her progress and the quality of the instruction, she followed her parents’ wishes and trained as a concert pianist with Julius Epstein. From 1868 to 1873 she had some success as a pianist, until a hand injury forced her retirement from the piano. At age 30, she returned to painting, and devoted herself wholly to her art. She studied first with August Schaeffer and then with Emil Jakob Schindler.

Life and work
Olga Wisinger-Florian was born in Vienna on 1st November 1844. She lived and worked here all her life. Not much is known about her private life. We know she was also active in the Austrian middle-class women’s movements of the time.
Her early paintings can be assigned to what is known as Austrian ‘Mood Impressionism’. In her landscape paintings she adopted Schindler’s sublime approach to nature. The motifs she employed, such as views of tree-lined avenues, gardens and fields, were strongly reminiscent of her teacher’s work. After breaking with Schindler in 1884, however, Olga went her own way. Her conception of landscapes became more realistic. Her late work is notable for a lurid palette, with discernible overtones of Expressionism. With landscape and flower pictures that were already Expressionist in palette by the 1890s, she was years ahead of her time.
Despite her late start as a painter, Olga Wisinger-Florian enjoyed renown in fin de siècle Vienna. Using extreme perspectives and distant horizons, she experimented with new experiences of space and vision, and with her ‘close-up views’ referenced the then young medium of photography. Olga Wisinger-Florian, who campaigned for women’s rights all her life, was among the most highly decorated artists of her time, and numbered the high aristocracy and the imperial family among her clients. An exhibition, curated by Marianne Hussl-Hörmann with the assistance of Alexander Giese, features a selection of paintings by Wisinger-Florian and is supplemented by photographs and biographical documents, from which the multi-talented artist’s meticulously kept diaries stand out most prominently: they afford singular insights into the artist’s world of thought and the process of evolution of her art.
On February 27th 1926 she died at 81 in Grafenegg, Austria.

Exhibitions & awards
1879 – at 35 she was included in an exhibition of the Viennese Art Association.
?date? – she was one of only nine women asked to contribute to Die österreichisch-Ungarische Monarchie, a 24-part encyclopedia of the lands and peoples of the Austro-Hungarian empire—of the other women included, Wisinger-Florian was the only Austrian.
1881 onwards – she regularly showed paintings at the annual exhibitions mounted at the artist’s house and later often showed at Vienna Secession exhibitions. The work she showed at the Paris and Chicago international exhibitions earned her worldwide acclaim. She exhibited her work at the Palace of Fine Arts.
1893 – the Woman’s Building at the 1893 World’s Columbian Exposition in Chicago, Illinois.
2019 – several of her paintings were exhibited at the Leopold Museum in Austria.
Olga was was awarded numerous distinctions and prizes. 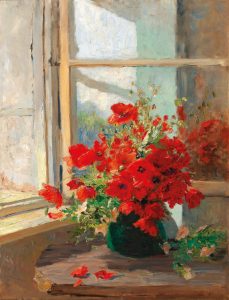 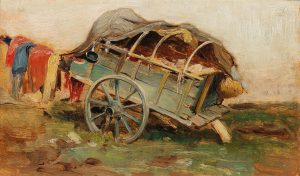 More of her paintings can be seen on this page.