Marie Bracquemond (1840–1916) was a French impressionist artist. Although less well known, she was one of ‘Les Trois Grandes Dames de l’Impressionisme alongside Berthe Morisot and Mary Cassatt. 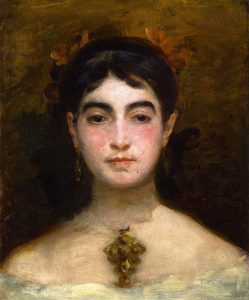 Professional education
She began lessons in painting in her teens under the instruction of Auguste Vassor. She progressed to such an extent that in 1857 she submitted a painting of her mother, sister and old teacher posed in the studio to the Salon which was accepted. She was then introduced to the painter Jean Auguste Ingres who advised and taught her. As a student in Ingres’ private Parisian studio, she wrote that, “The severity of Monsieur Ingres frightened me… because he doubted the courage and perseverance of a woman in the field of painting… He would assign to them only the painting of flowers, of fruits, of still lives, portraits and genre scenes.”

Life and work
She was born as Marie Anne Caroline Quivoron on 1 December 1840 in Argenton-en-Landunvez in Brittany. She was the child of an unhappy marriage. Her youth was an unsettled existence, moving from Brittany to the Jura, to Switzerland, and to Limousin, before settling in Étampes, south of Paris. She had one sister, Louise.
The critic Philippe Burty referred to her as “one of the most intelligent pupils in Ingres’ studio”. She later left Ingres’ studio and began receiving commissions for her work, including one from the court of Empress Eugenie for a painting of Cervantes in prison. This evidently pleased, because she was then asked by the Count de Nieuwerkerke, the director-general of French museums, to make important copies in the Louvre.
Here she met painter Felix Bracquemond, who fell in love with her. They were introduced and from then, they were inseparable. They  married on 5 August 1869, despite her mother’s opposition. In 1870 they had their only child Pierre. Because of the scarcity of good medical care in those days, Bracquemond’s already delicate health deteriorated after her son’s birth. Much of what is known of Bracquemond’s personal life comes from an unpublished short biography written by her son, entitled La Vie de Félix et Marie Bracquemond.
Félix and Marie Bracquemond worked together at the Haviland studio at Auteuil where her husband had become artistic director. She designed plates bowls and executed large Faience tile panels depicting the muses, which were shown at the Universal Exhibition of 1878. And she began having paintings accepted for the Salon on a regular basis from 1864.
Between 1887 and 1890, under the influence of the Impressionists, Bracquemond’s style began to change. Her canvasses grew larger and her colours intensified. She moved out of doors started working en plein air. And to her husband’s disgust, painters like Monet and Degas became her mentors. Many of her best-known works were painted outdoors, especially in her garden at Sèvres. One of her last paintings was The Artist’s Son and Sister in the Garden at Sèvres.
She was overshadowed by her well-known husband, but the oeuvre of the reclusive Marie Bracquemond is considered to have been closer to the ideals of Impressionism. According to their son Pierre, Félix Bracquemond was often resentful of his wife, brusquely rejecting her critique of his work, and refusing to show her paintings to friends or visitors. In 1890 Marie Bracquemond, worn out by the continuous  friction and discouraged by lack of interest in her work, abandoned her painting except for a few private works. She remained a staunch defender of Impressionism throughout her life, even when she was not actively painting. In defense of the style to one of her husband’s many attacks on her art, she said, “Impressionism has produced … not only a new, but a very useful way of looking at things. It is as though all at once a window opens and the sun and air enter your house in torrents.”
Her paintings found their way to several museums in France and abroad and to private collections. She died in Paris on January 17, 1916.

Exhibitions
1879, 1880, and 1886 – participated in the Impressionist exhibitions
1880 – some of her drawings were published in La Vie Moderne
1881 –  she exhibited five works at the Dudley Gallery in London
1919 – Bernheim-Jeune. Catalogue des peintres, aquarelles, dessins et eaux-fortes de Marie Bracquemond. Paris.
1979-1980  University of Michigan, Museum of Art. The Crisis of Impressionism, 1878-1882. Included works by Marie and Felix Bracquemond, Cassatt and Morisot & other Impressionist artists.
2018 – included in the exhibition Women in Paris 1850-1900. 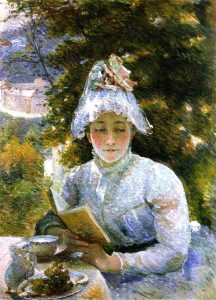 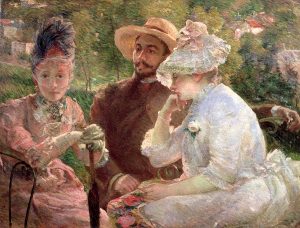 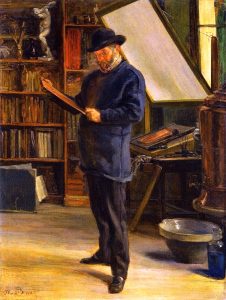 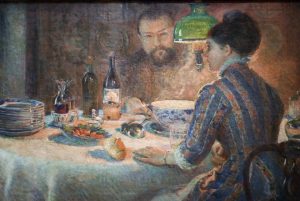 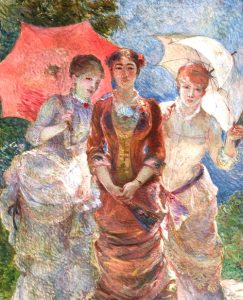