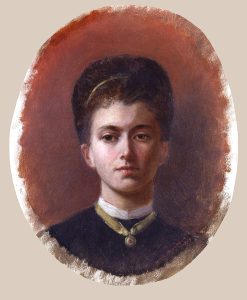 Life and work
Elizabeth Thompson was born at Villa Claremont in Lausanne, Switzerland, as the daughter of Thomas James Thompson (1812–1881) and his second wife Christiana Weller (1825–1910). Her sister was the noted essayist and poet Alice Meynell. Elizabeth began receiving art instruction in 1862, while growing up in Italy. In 1866 she moved to South Kensington, London, and entered the Royal Female School of Art. The family moved to Florence in 1869. While in Florence, under the tutelage of the artist Giuseppe Bellucci (1827–1882), Elizabeth attended the Accademia di Belle Arti. She signed her works as E.B.; Elizth. Thompson or Mimi Thompson (she was called “Mimi” from her childhood).
Initially Thompson concentrated on religious subjects, but upon going to Paris in 1870 she was exposed to battle scenes from Jean Louis Ernest Meissonier and Édouard Detaille, and switched her focus to war paintings. With her painting Missing (1873), a Franco-Prussian War battle scene depicting the common soldiers’ suffering and heroism, she earned her first submission to the Royal Academy.

Butler’s painting The Roll Call, which depicted a line of soldiers worn out with conflict, was shown in 1874 at the Royal Academy Summer Exhibition and became so popular that the crowds that came to see it, had to be regulated by a policeman. Butler wrote that after the opening of the Summer Exhibition she awoke to find herself famous.
Her fame increased as the paintings toured Europe, along with photographs of Elizabeth, she gained even more notice because people found out that she was both young and pretty, something normally not associated with painters of battle scenes. It also helped that during this time there was a huge swell of Victorian pride and romanticism for the growing British Empire. Her paintings were generally realistic in detail with aspects such as confusion, mud and exhaustion being accurately portrayed. Her works tend to focus on British troops shown in action, or shortly after it, but avoiding scenes of hand-to-hand combat. The troops are often shown as their opponents might have seen them, but relatively few of the opponents themselves are shown.

After her marriage in 1877 to Sir William Francis Butler (1838–1910), a distinguished officer of the British Army, from Tipperary, Ireland, Butler traveled to the far reaches of the Empire with her husband and raised their six children. During this time Lady Butler came under the influence of her Irish husband’s belief that the colonial imperialism of the United Kingdom and other European powers might not be in the best interest of the natives in colonial lands. Yet she continued to paint scenes showing the valour of the ordinary British soldier. Butler also did some black and white illustration, including of poems by her sister, Alice Meynell.
She wrote about her military paintings in an autobiography published in 1922: “I never painted for the glory of war, but to portray its pathos and heroism”.
On her husband’s retirement from the army, she moved with him to Ireland, where they lived at Bansha Castle, County Tipperary. During the Irish Civil War her water colour paintings from Palestine were transferred to her daughter in Gormanston Castle for safekeeping, but were almost all destroyed later by German bombs in London during World War II.
Lady Butler was widowed in 1910, but continued to live at Bansha until 1922, when she took up residence with the youngest of her six children, Eileen, Viscountess Gormanston, at Gormanston Castle, County Meath. She died there shortly before her 87th birthday and was interred at nearby Stamullen graveyard.

Exhibitions & Museums
1874  Royal Academy Summer Exhibition
1893 World’s Columbian Exposition in Chicago
1892 Royal Hibernian Academy
2018 Elizabeth Thompson was included in the exhibit Women in Paris 1850-1900.
Many of her military works found their way to museums. The painting on the top of this page is called Scotland Forever! and was painted in 1881. It can be seen in the Leeds Art Gallery, UK. 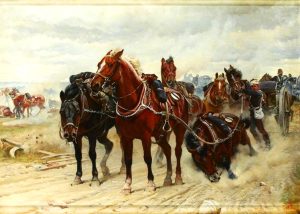 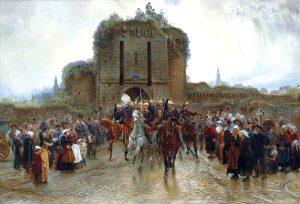