Elin Kleopatra Danielson-Gambogi (1861-1919) was a Finnish painter, best known for her realist works and portraits. Danielson-Gambogi was part of the first generation of Finnish women artists who received professional education in art, the so-called “painter sisters’ generation. 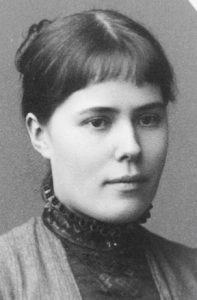 Life and work
Elin was born on 3rd September 1861 in the small village of Noormarkku, in Western Finland. Elin spent her childhood on her family’s farm in the country. In 1872 she suddenly came face to face with the harsh realities of life with the dramatic suicide of her father Karl Emil Danielson who was a smallholder and who left his wife and young children Elin and Rosa (Titty) in economic difficulty. Elin was ten years old. Her mother, Rosa Amalia Gestrin, encouraged her to continue her studies, with the financial help of her brother (Elin’s uncle) Mauritz Gestrin, who would be a longtime supporter of his artistic niece.
At the age of fifteen, she entered Helsinki’s Finnish Art Society Drawing School, where, in addition to drawing technique and painting, she studied painting on porcelain. The latter proved an invaluable training as it enabled her to support herself. In 1880 she obtained a teaching diploma, having taken classes with the painter Adolf von Becker, whose private school was attended by several young Finns, including Helene Schjerfbeck and Ellen Thesleff. Here she learned how to paint in oils, studied figure painting and still life painting in detail and learned how to transpose the qualities of various materials – glass, fabrics, porcelain, metals – onto canvas. Elin was a highly motivated student and stood out for the dedication and determination with which she tackled every subject. She worked hard and made great progress. She achieved an excellent mastery of technique and became one of the Academy’s star pupils.
Teaching and porcelain painting provided her with an income. Elin Danielson had a strong character, was independent and determined, was able to support herself by commissions of porcelain painting and by giving drawing lessons. But she did not feel that teaching was her vocation, she increasingly felt that art was her great passion in life, her calling.

Thanks to a grant which she received in 1883 she was able to travel to Paris. There she enrolled at the Académie Colarossi, and received training from the painters Gustave Courtois and Raphaël Collin. Elin found Paris exciting and stimulating. She studied the masters of the past and observed the work of her contemporaries by often visiting the Salons. She also began to study sculpture under Auguste Rodin. In the summertime she left the capital for the popular artists’ communities in Brittany, where the landscapes were a perpetual source of inspiration and where she learned to work ‘en plain air’. lt was here that she met the naturalist painter Jules Bastien-Lepage, who inspired her to lighten her palette. The young artist divided her time between France and Finland, where she worked outdoors under the leadership of Victor Westerholm in a group known as the Onningebykolonin, similar to the Danish group Skagen, led by the couple Michael and Anna Ancher.

Her favorite subjects tended to be portraits of women engaged in ordinary daily work, such as the one on the left. Her work shows great expertise but also demonstrates a remarkable ability to see the world from an individual viewpoint. The artist was critical of conditions for women, and demonstrated an indifference to prevailing social mores, entertaining relationships with several artists, among them the Norwegian sculptor Gustav Vigeland.

A new grant allowed her to travel to Florence in 1895. She returned the following year for a short period, and soon afterward settled permanently in ltaly, near Livorno. ln 1898 she married the ltalian painter Raffaello Gambogi, thirteen years her junior. The couple influenced each other mutually, for years participating together in exhibitions in France and ltaly. Elin Danielson-Gambogi achieved a certain success in Italy, taking home a prize given by Florence, and her paintings were also included in the 1900 World’s Fair in Paris. One of her paintings “Estate” (Summer) was bought by King Umberto I for 4000 lire.
But the situation quickly deteriorated. Their marriage was under pressure because of Gambogi’s infidelity. Her husband also suffered from mental problems and leaned on his wife more and more. There was hardship and financial insecurity. The outbreak of World War l made it difficult for her to sell her work and impossible to see her native country before her death. She died of pneumonia on 31 December 1919 in Antignano and was buried in Livorno.

Exhibitions and awards
Danielson participated in several exhibitions in Finland, France and Italy.
Prize from the city of Florence.
1900 – World Fair in Paris. 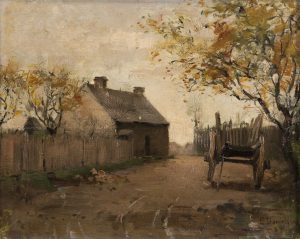 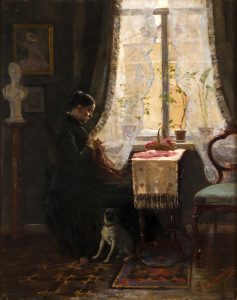 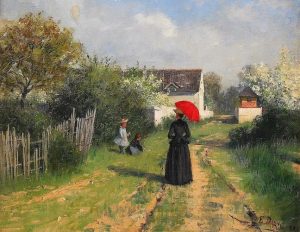 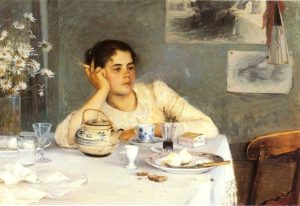 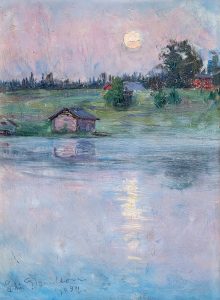 More of her fascinating work to be found here.