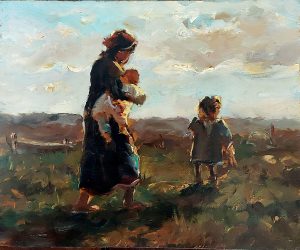 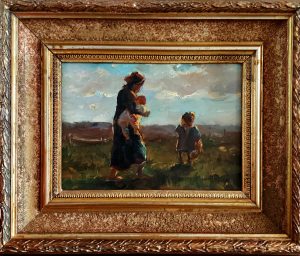 (before cleaning)
Both the painting and the frame have been professionally cleaned.

Edith Hume was born in 1843, in Truro (Cornwall, UK) as Edith Dunn. Her father was a prosperous tea and spice merchant; her mother was a talented embroiderer and sketcher. There were five siblings – Emily, the eldest, then Harry Treffry, Frances, Edith and Ellen. Edith’s companion and confidant was Harry with whom she shared a childhood passion for wandering around Cornwall on sketching expeditions. Often their focus was the beach and its sea birds.
When she married the painter Thomas O. Hume she signed her work with ‘Edith (or E.) Hume’.

Professional education
She received professional training at the Heatherly School of Fine Art in London (dates unknown), where her brother was also enrolled. Heatherley’s was the first school in London to admit female candidates on an equal basis as their male counterparts. It was also a school that encouraged its students to develop their own style. Edith was one of four or five women enrolled including her classmate Kate Greenway.

Work & life
A skilled painter, watercolorist and illustrator, Edith began publicly exhibiting in 1862 while living in Worcester. She also provided illustrations to periodicals such as The Quiver: An Illustrated Magazine for Sunday and General Reading.  By the 1860s her brother Harry had become Dante Gabriel Rossetti’s studio assistant. Edith began to travel a great deal on the continent, particularly to the Netherlands. In 1870 she married the landscape painter Thomas O. Hume. The Humes lived in London but eventually settled in the scenic district of South Harting at the foot of the South Downs in West Sussex.
Often active in the Netherlands during the years 1878–1906, she created beach scenes of Dutch fisher folk in Katwijk and Scheveningen as a follower of the Hague School. In that period it is likely that she was acquainted with Sientje Mesdag, who promoted professional paining education for women.
Also the influence of Bernard J. Blommers is evident. Working mainly in Scheveningen and Katwijk, Blommers specialised in depicting the lives of the fishing community, especially the wives and children, and so did Edith. This coincided with a period when the seaside and swimming in the ocean came into fashion. Fishing villages like Scheveningen and Katwijk became resorts that attracted visitors and artists from all over the world, almost assuredly including Edith. The Hague School artists from the 1870s onwards became incredibly popular as did a general taste for all things Dutch. This proved especially true in England, Canada and America.

Exhibitions & museums
In total 83 works are recorded as having been shown by the artist at: The British Institution; Fine Art Society, Glasgow; Institute of Fine Arts; Grosvenor Gallery; Manchester City Art Gallery; New Water-colour Society; Royal Academy; Royal Scottish Academy; Royal Institute of Oil Painters; Royal Scottish Society of Painters in Water Colours; Royal Society of British Artists; Suffolk Street and the Walker Art Gallery among others.
Hume’s works are in the permanent collections of the Victoria and Albert Museum, London as well as the museums of Bournemouth and Sheffield.