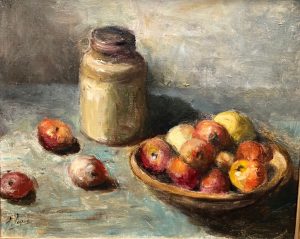 Still life with apples and a pot
Oil on canvas
Signed lower left, s.d.
42 x 52 cm
In very good condition; paint marks on the back of the frame. 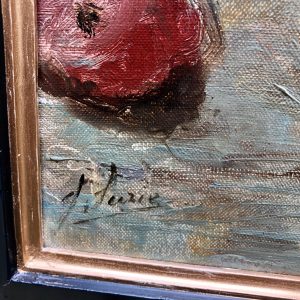 Jacoba (Coba) Surie (1879-1970) was born in Amsterdam on September 5th in 1879. She was the daughter of well-to-do coffee trader Hendrik Carel Surie and Sara Johanna Lingeman.
Once she described her father as “an artistic man who played the violin beautifully and who was always drawing.” On her mother’s side there was an artist, the painter Lambertus Lingeman (1829-1894), who – by the way – did not influence her with his 17th century genre pieces. 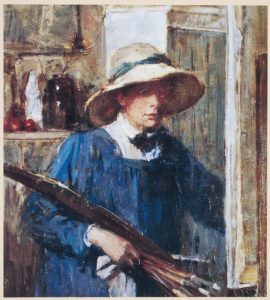 ‘I have a volatile nature, so for me it’s the direct impression; I don’t want to be diversed.’
Coba Surie

Professional training
Jacoba Surie started her training from 1898 to 1901 at the Teekenschool voor den Werkenden Stand (Drawing school for workers) in Amsterdam. At the same time she received painting lessons from Jo Stumpff.
In 1901 she enrolled into the Rijksakademie van Beeldende Kunsten (State Academy of Visual Arts), also in Amsterdam. Here she was taught by Joseph Mendes da Costa. At the Academy she became friends with female painters Lizzy Ansingh and Ans van den Berg. She was invited by Lizzy Ansingh to join a circle of female painters, later known as ‘Amsterdamse Joffers’ (Amsterdam Young Ladies). From 1908 to 1910 she was taught by Coba Ritsema, also a member of the ‘Joffers’.
Surie was a professional member of several art societies, for in instance: De Amsterdamse Joffers, Arti et Amicitiae and Saint Lucas, all in Amsterdam. She was also a member of Pulchri Studio in Den Haag and of Pictura Veluvensis in Renkum.
As a professional painter she mostly worked in Amsterdam. For 36 years she shared a house & studio here with Ans van den Berg, also one of the Amsterdamse Joffers, on the Keizersgracht. Together they travelled sometimes, both in the Netherlands (Brabant en Zeeland) as well as to Italy in 1912, and to Paris in 1918. 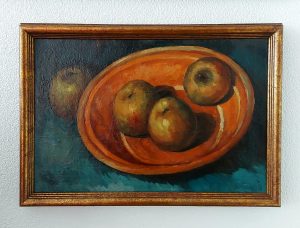 Life and work
When Jacoba was 12 years old, like many girls of her age and standing, she was sent to boarding school Godesberg, where she was taught in modern languages, music and artistic formation. Once she came back, she chose for painting, although much later she said to Jan de Carpentier: “If I had been born later, my choice would have been photography!” But then she added: “Ah well, female photographers just didn’t exist in those days. Imagine …!”
Jacoba Surie did not get married. She felt she was married to her work. Her style was impressionist and she worked until a right old age. When she was eighty she said: “I still have painting afternoons in the week, and those are the highlights of my life.” All Joffers worked separately, and each of them had a distinct personal touch. That’s why the meetings with the Joffers and drinking tea with famous portrettist Thérèse Schwartze were possibilities for her to talk shop and exchange experiences.
Like other Joffers, she had an aversion to artistic innovation or modernism and her work shows only little development, although after 1930 her style became somewhat more loose and lighter. She said about this: “Of course we followed the developments, but it didn’t change us.” She remained true to her own art.
She judged her own work as  ‘the least complicated of them all’. She wanted to give impressions of every day life around her. She was very modest, she didn’t behave like ‘a famous painter’ like Thérèse Schwartze or Coba Ritsema, and she was very conscious of the fact that she was less famous than those two. She wanted to work in her studio, and sometimes outside in summer and just do what she did best: paint honest impressions, still lifes, many with fish, flowers, fruits en and some beautiful portraits. Exactly those every day things inspired her. During her travels with Ans van den Berg, Coba did draw and make water colour sketches. Once back home, she didn’t feel like elaborating on those sketches, she wanted to go back to painting her fevourite subjects. She never saw herself as a ‘plein air’ painter, she preferred to work in her studio every day, working very disciplined, in spite of her ‘volatility’. She was a modest, quiet and a very social person; her colleagues and fellow-Joffers found her a very pleasant person and they valued her personally and professionally. No-one spoke negatively of her. She herself was inclined to disparage her own work and her position in the world.
In the last years of her life she lost much of her eyesight. This added a ‘mysterious haze’ to her last paintings, as Nieuwe Haagsche Courant wrote in 1968. When last-but-one ‘Joffer’ Betsy Westendorp-Osiek died in 1968, Jacoba Surie was devastated and felt very alone. Now she was the last one left and had no-one to share old memories with.
She died in her beloved Amsterdam on 5th Februari 1970, at the age of 90. She was burried in the cemetery Zorgvlied. She was the last one of the Amsterdam Joffers.

Awards
Jacoba Surie’s work received many awards and prizes. In 1913 she won the Willink van Collen prize and received de Bronze Medal at the exhibition named ‘De Vrouw (the woman)’. In 1919 received the Silver Medal of the city of Utrecht; in 1929 the Gold Arti-Medal of Queen Wilhelmina.
In 1940 she received the St. Lucas prize.
On April 29th 1963 she received a royal distinction from the then mayor of Amsterdam, Gijs van Hall: she became Knight in the Order of Oranje Nassau.

Exhibitions & museums
Her first exhibition was in 1918 at the Maatschappij voor Beeldende Kunsten, together with other Joffers.
Works of Jacoba Surie were exhibited in 1929 in Amsterdam, Arti et Amicitiae and at Vereeniging St. Lucas in 1931. Het work was also present at the exhibition ‘Still Life’ At Art Gallery Goudstikker in 1933. In 1940 she exhibited at the ‘Still Life and Flowers of 30 contemporary painters’. In 1954 her work was seen at the Ministry of Education, Arts and Sciences.
The Stedelijk Museum Amsterdam, the Kunstmuseum Den Haag as well as het Municipal Museum Helmond all have works of Jacoba Surie in their collection.