Two works in my collection. For more information about Coba Ritsema, please scroll down. 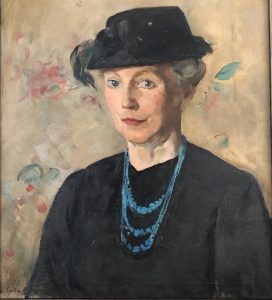 Please scroll down for more information on Coba Ritsema. 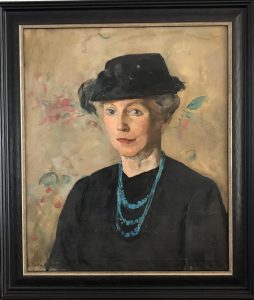 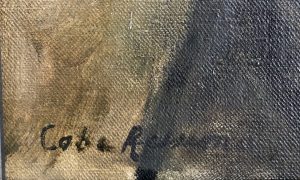 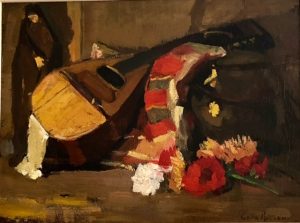 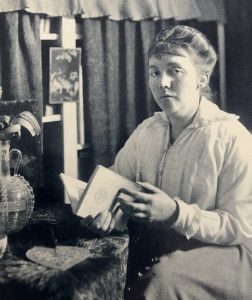 Jacoba Johanna Ritsema (1876-1961)
Coba Ritsema was often considered the most talented of the ‘Amsterdamse Joffers‘; she was very much influenced by Amsterdam impressionist George Hendrik Breitner. “Her work shows great composition as well as a majestic brush stroke,” critic Johan van Eikeren said in 1949. She displayed a firm touch, and a rich and colourful palet. She created many portraits and still lifes (photographer of this picture: unknown).

Professional Education
From 1891 to 1893 she attended the School voor Kunstnijverheid (school of applied arts) in Haarlem, where she learned the basics of drawing.
From 1893 to 1897 she studied at the Rijksacademie (State art academy) in Amsterdam, where she was taught by Allebé, whom she admired. At the academy she herself stood out: her teachers were astonished by her understanding of form as well as her fine feeling for colour.
Two years later she asked the famous society portrait painter Thérèse Schwartze to teach her, but she refused: “You are good enough to continue by yourself”, Thérèse said after visiting Coba’s studio twice.
Coba also asked to study with George Hendrik Breitner, but he also refused, he praised her art and probably thought there wasn’t much he could teach her. She regretted this and she would say: “I always had the feeling that I needed further education.” After this she developed her talent and modest style on her own to a high level of competence. She did this by looking closely at the works of her friends and colleagues like Breitner, Schwartze, Israëls and Robertson.
She herself became a teacher of the students Grada Jacoba Wilhelmina Boks,  Tine Honig, Coba Surie, Hillegonga Henriëtte Tellekamp, Victoire Wirix, and Gonda Wulfse.
She was a professional member of Amsterdamse Joffers, Drawing Society Pictura (Dordrecht), Pulchri Studio (Den Haag), St. Lucas and Arti et Amicitiae (both in Amsterdam).

Life and work
Coba Ritsema was born on June 26 in 1876 as the daughter of book printer Coenraad Ritsema and his wife Jeanette (Jannetje) Moulijn in an artistic family with one sister and two brothers. In her family there were already a few known artists – her grandfather Jacob Ritsema was an amateur painter and her father was a lithograph.
Her brother Jacob was studying at the Academy of Düsseldorf since his 15th year, also the age when Coba wanted to follow her brother to experience herself in the arts. However, for a girl it was ‘not done’ to go abroad at such a young age. That’s why she enrolled in the school of applied arts in Haarlem, and later she was admitted to the Rijksacademie in Amsterdam.
After moving back to Haarlem for a short period, she moved in 1899 to a house at Jan Luykenstraat 23 in Amsterdam, while she had her studio at the fourth floor of Singel 512.
She focussed on still lifes and portraits. Ritsema’s work was described in 1947 by critic Johan van Eikeren as if “they could have been created by a man” – which was considered to be a great compliment in those years. She was considered ‘the best of class’ at the Academy (according to her peer Lizzy Ansingh) and the most talented of the Joffers.
Coba was close with her brother Jacob, they always discussed the art and each others’work. When he suddenly died in 1943, she took it hard – Jacob was also a painter after all, and she consulted him often. She wasn’t a feminist but she was considered to be an example of an independent woman.
Although she did make some study trips to Paris, London and Brussels, she preferred to work in her Amsterdam studio. She was a city girl, the countryside did not attract her so much. She was an introvert person, a bit of a loner, she didn’t care for money (she might even spend it before earning it), and she wasn’t always easy to be with. She was happy in her studio, forever improving her art and craft.
Thanks to numerous exhibitions and prizes, she was able to sell her work easily.
At old age she remained active although her studio on the fourth floor wasn’t easy to reach – she had chairs placed on every floor in order to be able to rest on each floor while she climbed the steep Amsterdam stairs. In her final years she lived in an old people’s home called ‘Pro Senectute’ in the Vondelstraat Amsterdam where she had a hard time abiding by the rules. Here she died at 85 on December 13th 1961 because of a heart attack. It was front page news in the National newspapers: “Coba Ritsema deceased, one of the greatest female painters of our country” (NRC).