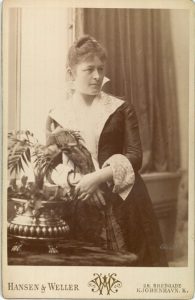 Bertha Wegmann (1847–1926) was a Danish/Swiss painter of beautiful interior scenes as well as portraits and landscapes.

Life and work
Bertha was born on 16 December 1847 in Soglio, Switzerland. When she was five, her family moved to Copenhagen, where her father became a merchant. He was also an art lover and spent much of his spare time painting. His daughter Bertha showed an interest in drawing at an early age. Two years later, with the support of her parents, she moved to Munich. She lived and studied there until 1881.
She became good friends with the Swedish painter Jeanna Bauck, and together they took several study trips to Italy. In 1881, when she was 34, they both moved to Paris where Wegmann exhibited at several salons and received an “honorable mention”.
In 1887 she became the first woman to hold a chair at the Royal Danish Academy of Fine Arts. From that year through 1907, she was a member of the board for the “Tegne- og Kunstindustriskolen for Kvinder” (Drawing and Art Industrial School for Women).
On 22 February 1926 (aged 79) she died suddenly while at work in her studio in Copenhagen.

Professional education
She received no formal education until she was nineteen, when she began taking lessons from Frederik Ferdinand Helsted, Heinrich Buntzen and Frederik Christian Lund.
In Munich she studied with the historical painter Wilhelm von Lindenschmit the Younger, later with the genre painter Eduard Kurzbauer, but she decided she wasn’t learning enough in a studio atmosphere and went out more to study directly from nature.

Exhibitions and awards
1873- 1881 – several exhibitions at the Charlottenborg Palace, Copenhagen.
1881 – exhibited at several Paris salons and received an “honorable mention”.
1883 – a portrait of her sister was awarded the Thorvaldsen Medal.
1892 – she was one of the first women to receive the royal Ingenio et Arti medal.
1893 – exhibited at the World’s Columbian Exhibition in Chicago. 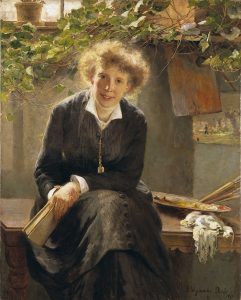 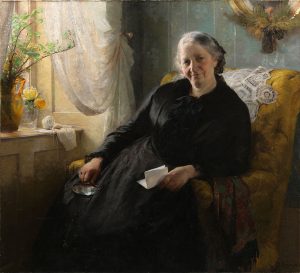 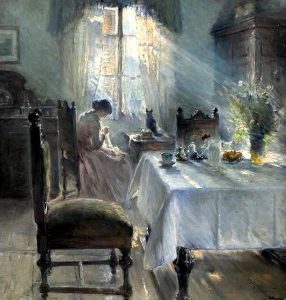 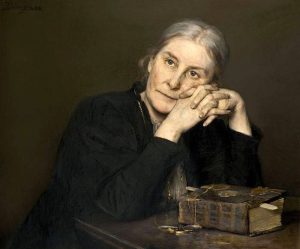 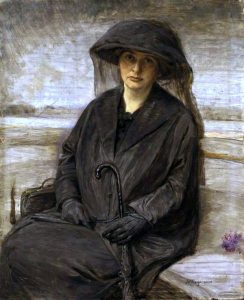