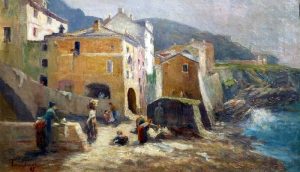 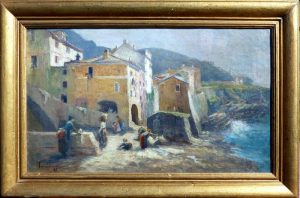 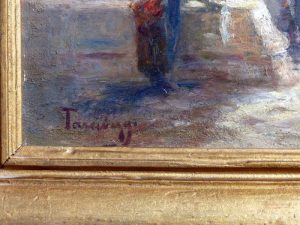 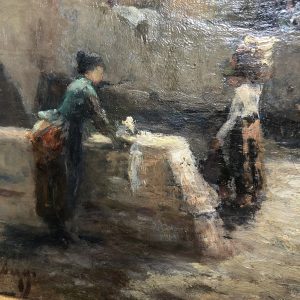 Bertha von Tarnóczy was born in Innsbruck on 1 April 1846 into a family of nobility. Her father was the court Financial Director, Karl Ludwig von Tarnóczy-Sprinzenberg and her uncle was the Archbishop (later Cardinal), Maximilian Joseph von Tarnóczy. She was sent to the convent school of Sacré Coeur in Riedenburg, the place where she first displayed her talent for drawing. She often accompanied her father on his numerous travels, until 1875/76 when she started her art lessons.
For ‘personal reasons’, she moved to Vienna in 1886, studied with Emil Jakob Schindler and became friends with artist Olga Wisinger-Florian. Later, she took several study trips to Italy (where she made this painting) and Holland and began exhibiting her work.
She also started giving lessons to children of the nobility. Following the death of Michaela Pfaffinger, Bertha took over her art school in Linz, which she operated until 1919.
In 1901, together with Wisinger-Florian, Eugenie Breithut-Munk, Marianne von Eschenburg, Marie Egner, Susanne Granitsch, Marie Müller and Teresa Feoderovna Ries, she founded the group ‘Acht Künstlerinnen’ (Eight Women Painters) in Vienna. Later, she became one of the first members of the Austrian Association of Women Artists. She died on 6th March 1936, in Pörtschach am Wörthersee.

Professional education
1876/77 – took her first art lessons in Salzburg with Anton Hansch.
1877 – she went to Munich to study in the Women’s Department at the Academy of Fine Arts with Theodor Her and took private lessons from Jeanna Bauck.
1882 – she was one of the founding members of the Munich Women Artists’ Association.

Exhibitions
Notably in Salzburg and Budapest.
In 1891, she received an Honorary Diploma at an exhibition in Agram (now Zagreb).