Annie Louisa Swynnerton (26 February 1844 – 24 October 1933) was a British painter, well known for her portraits and symbolist works. She was also a capable landscapist. 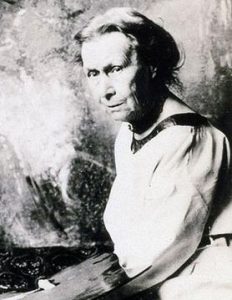 Professional education
1871 – she studied at Manchester School of Art.
1874 – 1876, she took art lessons in Rome together with her friend and fellow artist, Susan Isabel Dacre.
1877 – 1880, they were in Paris to study at the Académie Julian.
She was much influenced by George Frederic Watts and also by Edward Burne-Jones.

Life and work
She was born in Hulme, Manchester in 1844 as Annie Louisa Robinson. Her parents were Francis Robinson, a solicitor, and Ann Sanderson. She had six sisters. Emily, one of her sister, was also an artist.
She shared a studio with her life long friend Susan Isabel Dacre. In 1879, the two women founded the Manchester Society of Women Painters, which offered art education and exhibitions. Her sister Emily Robinson was also a member. Swynnerton painted Dacre’s portrait, which was exhibited in 1880 at the Royal Academy of Arts. It was then donated to the Manchester Art Gallery.
Whilst she was living in Rome, she met sculptor Joseph William Swynnerton, from the Isle of Man. They married in 1883 and lived primarily in Rome and had a studio in Sheppard’s Bush in London. He supported her artistic ambitions.
Although she was not a ‘feminist’ in the modern sense, she supported the Women’s Suffrage movement of that time and she was a signatory to the 1889 National Union of Women’s Suffrage Societies’ Declaration. She was not an active suffragette, but she clearly supported the goals by her involvement with the Pankhursts and the Declaration.
In 1910 her husband died. After his death, she lived in Chelsea, London and Rome, before finally settling on Hayling Island in England.
Painter John Singer Sargent appreciated her work and helped her to become the first elected woman member at the Royal Academy of Arts in 1922. In her later years, her eyesight deteriorated.
She died in Hayling Island on 24th October 1933. There was a posthumous sale of the contents of her former studio at Christie’s in London on 9 February 1934.

Annie Swynnerton’s style can be described as incorporating aspects of Neoclassicism, Pre-Raphaelitism and Impressionism. She painted portraits of members of the Garrett family, including Agnes (1885); Louisa, a member of the Manchester National Society for Women’s Suffrage; Millicent Garrett Fawcett (which can now be seen at the Tate Gallery); and Louisa Garrett Anderson. She also painted portraits of people close to the Garretts, including Henry James and Rev. William Gaskell. Composer Dame Ethel Smyth was a patron to Swynnerton.
In 1939 she was described as follows: “She was a talented artist and an accomplished woman, though scarcely one of whom it could be said she possessed a charm of manner. Indeed, by maintaining the courage of her convictions she was at times embarrassingly outspoken. She had a slight stutter.” (Gladys Storey).

Exhibitions & Museums
With an initial introduction by Burne-Jones, Swynnerton exhibited at the Royal Academy of Arts from 1879 to 1886 and then from 1902 to 1934.
In 1880 her portrait of Dacre was exhibited at the Royal Academy of Arts.
In 1893, Florence Nightingale at Scutari was shown at Women’s Exhibition at the Chicago World’s Exposition.
Annie Swynnerton was included in the 2018 exhibit Women in Paris 1850–1900.
Her works can be seen in collections in England (o.a. Manchester Art Gallery; Tate Gallery, Royal Academy), Scotland (Aberdeen Art Gallery; Glasgow Museums), New York (Metropolitan Museum), Paris (Musée d’Orsay) and Melbourne (National Gallery of Victoria). 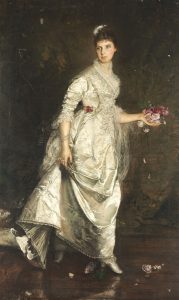 Annie Swynnerton
The Lady in White, 1878 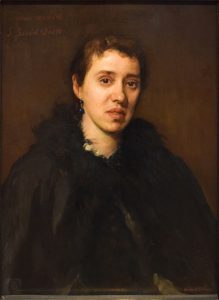 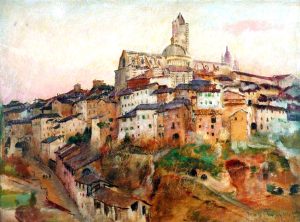 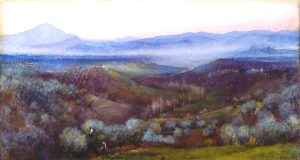 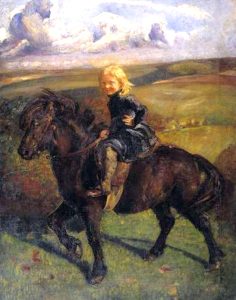 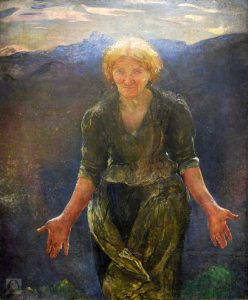 Annie Swynnerton
The Southing of the Sun, 1911 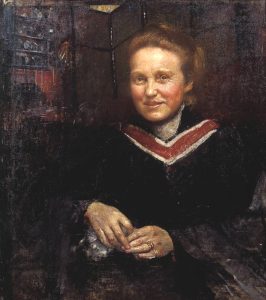