Rosalie-Anna Boch was a Belgian painter, known for her Impressionism and Luminism. She seems to be the only one who bought a painting from Vincent van Gogh during his lifetime. Her younger brother Eugène Boch (1855-1941) was also a gifted painter.
She mainly painted landscapes, still lifes with flowers, sunny beaches, the Belgian coast and dunes, the coasts of Brittany and the Netherlands. 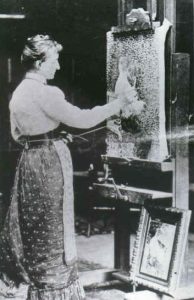 Anna Boch in her studio
before 1900
photographer unknown

Life and work
Anna Boch was born on February 10, 1848 in Saint-Vaast (Belgium). She was the eldest daughter of Victor Boch and Anne-Marie-Lucie Boch, both scions of the wealthy Boch family, who had been active in the faience and ceramic industry for many years. Another branch of the family managed the faience factory Villeroy & Boch in Mettlach in Prussia. Her father co-founded the Royal Boch faience and ceramics company in La Louvière in 1841. Anna was the oldest child in the family. She received her general education partly at the boarding school in Bergen (Mons), later in Cologne.
Anna’s parents were excellent illustrators and Anna also started drawing and painting at a very young age. She often went to draw with her younger brother Eugene in the park of the castle in Mariemont. The family went on holiday to the Belgian coast in the summer. Her father drew a portrait of her in 1864 whilst she herself was sketching on the beach of Blankenberge. In 1865, at the age of 17, Anna made a number of drawings in Heist and Blankenberge, in which she recorded her surroundings with great accuracy.
When her mother died in Switzerland in 1871, the family moved to Brussels. Here Anna met some painters. With Isidore Verheyden she painted en plein air in the vicinity of the Sonian Forest. They continued to work together for ten years. She painted Isidore Verheyden in his studio in 1884 and he in turn made a portrait of Anna, painting on the beach near the dunes (private collection). Under his influence her color palette became lighter and her touch more powerful. She developed a true love for nature and this was reflected in her landscapes. This means that Anna Boch is counted among the so-called ‘second generation’ of the School of Tervuren. In these years (1875-1880) Anna Boch visited the Limburg Kempen several times, often in the company of her brother Eugène. For this reason, she is sometims referred to as belonging to the so-called Genk School.

Anna Boch & Les XX
As the only female member, Anna joined the avant-garde art circle Les XX (Les Vingts) in Brussels in 1885, founded by her cousin Octave Maus, where she met other artists.
From 1888 onwards, Theo Van Rysselberghe strongly influenced her here. He was captivated by the light and conveyed his enthusiasm to her to reproduce this impressionistic light on canvas. Under his influence, she briefly practiced pointillism, which became popular in France. Her color palette became even brighter and her brush strokes more powerful. In this Impressionist phase she was fascinated by the constantly changing aspects of light and the reflection on the sea. In 1893 she visited her friend Van Rysselberghe in his rented villa Duivekot in Knokke and had animated conversations with other artists. She painted the scenic spots in the area in oil or watercolor. But in the end, she found that this technique hindered her in the free and spontaneous movement of her brushstrokes and she left this art direction. Van Rysselberghe made a neo-Impressionist portrait of her in 1889 (Museum of Fine Arts, Springfield, Massachusetts, USA). Although Anna Boch kept somewhat in the background in this art circle, this was still a springboard for her to become more famous in Belgium and abroad.
The Les XX artists’ association had invited Vincent van Gogh, among others, to participate in their Salon des Vingts exhibition in 1890. Vincent was pleasantly surprised and submitted six works. Anna was touched by Van Gogh’s work and during this exhibition she bought his painting The Red Vineyard for 400 francs (it can now be found in the Pushkin Museum in Moscow). This seems to be the only painting he sold in his lifetime. After his death, she bought another: The Plain of La Crau with an orchard of peach trees (now on display at the Courtauld Gallery in London).
While in those days Van Gogh’s work was mainly reviled, the work of Anna Boch was popular with the public, because of her harmonious use of color and attractive themes. Yet it was not her goal to please, which is apparent from a letter to her sister Elisa (in 1930), in which she wrote about a still life with vegetables she had just made (at the age of 82): “That work was made under the influence of Van Gogh, clear and powerful, so strong that I destroyed my painting with fruit and I would like to destroy all my paintings.”
She was quite eager to travel; around 1900 she regularly traveled to the Netherlands, Italy, the south of France, Spain and Morocco. In these countries she discovered new horizons and especially the light that was so different from the light in her own place. During these trips she was often accompanied by her brother, painter Eugène Boch (1855-1941). In September and October 1906 she traveled together with Théo van Rysselberghe to Veere in the Netherlands, where she painted different views of the city.
In 1911 she was one of the co-founders of Galerie Lyceum, a Brussels association of female visual artists. She was represented at the opening exhibition with a few paintings. In the same year she was elected chair of the jury of the Salon d’Art Moderne in Charleroi.
Her later life became her most productive period. Her technique changed after the First World War. It now evolved more towards Fauvism, without her really belonging to this short-lived movement.
From 1923 her health deteriorated and she limited herself to work in her studio. This meant she had to limit herself to portraits and still lifes with flowers.
As an engaged artist, she was very up-to-date in the field of painting, decoration and music. She came into contact with many big names from the art world of the time. Her Art Nouveau house, in the Abdijstraat in Ixelles (now demolished), grew into a meeting place for the intelligentsia of her time. She organized private concerts there with, among others, Eugène Ysaÿe. By the way, she was a good musician herself: she played the piano, organ and violin. And as a true patron, she built up a collection of paintings of her art friends, with work – in addition to those of Van Gogh – by James Ensor, Paul Gauguin and Paul Signac, among others.
Anna Boch died in Ixelles, on February 25, 1936, at the age of 88. After her death, there were 212 of her own works and 219 paintings by Belgian and foreign painters who had exhibited at Les XX. A number of paintings and sculptures were sold for the benefit of the poor (as provided in her will). She left an important part of her collection to the Museum of Fine Arts in Brussels. As a painter she fell into oblivion; she was mainly remembered as a patron and collector.

Professional education
Anna Boch received her first painting lessons from Pierre-Louis Kuhnen (1812-1877), who specialized in romantic landscapes; he taught at the Brussels academy. And from 1874 she was taught by Euphrosine Beernaert.
In 1876 she learned to paint en plein air from Isidore Verheyden.

Exhibitions & Museums
1880 – debuted at the Brussels Salon.
1884 – first solo exhibition in the Cercle artistique et littéraire, Brussels.
1885 – a piece of hers was shown at the Paris Salon.
1891 – Salon des Indépendants.
1907 – Solo exhibition Cercle artistique et littéraire, Brussels.
1908 – Solo exhibition in Paris at Galerie Druet.
1930 – last major exhibition at Galerie Giroux in Brussels.
1934 – last participation in the Petite Galerie in Brussels.
Her work can be found in the museums of Mons, Brussels, Charleroi, Tournai, Ixelles, Ghent, La Louvière, Ostend, Verviers and Springfield (in the US state of Massachusetts), as well as in the Stedelijk Museum in Amsterdam. 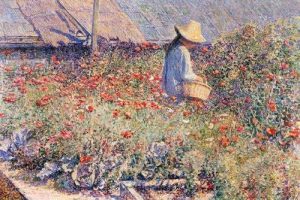 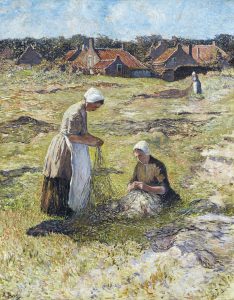 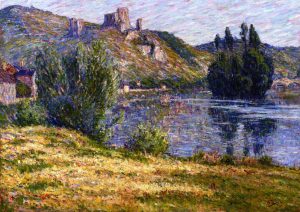 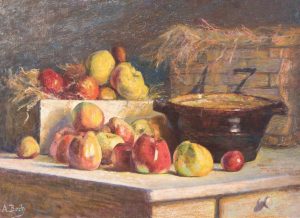