Anna Ancher (1859-1935) was a Danish painter associated with the Skagen group, an artists’ colony in the north of Denmark. She was a great visual artist in impressionist style. 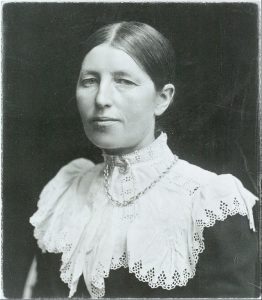 Professional education
From 1875-1878 she studied drawing for three years at the Vilhelm Kyhn College of Painting in Copenhagen. Here she  pioneered in observing the interplay of different colors in natural light. And in 1889 she studied in Paris at the atelier of Pierre Puvis de Chavannes. From then on, she developed her own impressionist style in painting landscapes, interiors, flowers and protraits.

Life and work
Anna Kirstine Brøndum was born in Skagen on 18th August 1859. She was the daughter of Erik Andersen Brøndum (1820–1890) and Ane Hedvig Møller (1826–1916). She was the only one of the Skagen Painters who was actually born and grew up in Skagen, where her father owned the Brøndums Hotel. Her artistic talent became obvious at an early age, as she grew acquainted with pictorial art via the many painters who settled and worked in Skagen.
In 1880 she married fellow painter Michael Ancher, whom she met in Skagen. They had one child, daughter Helga. Despite pressure from society that married women should devote themselves to household duties, she continued painting after marriage.
Ancher preferred to paint interiors and simple themes from the everyday lives of the Skagen people, especially fishermen, women and children. She was intensely preoccupied with exploring light and color. She also created more complex compositions such as A Funeral (1891). Ancher has been known for portraying similar civilians from the Skagen art colony in her works, including an old blind woman. 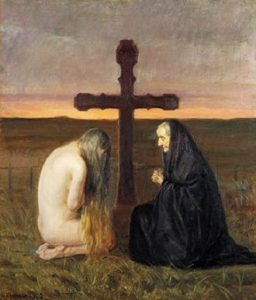 Her portrayal of the female nude in Sorg (Grief), from 1902, is unique for the time given, not overtly sexualized and obviously not created for the male gaze. Scholar Alice R. Price asserts that this piece is a reflection of her position as a woman of faith and the traditional bohemian lifestyle of artists, indicative of an ongoing inner conflict.

Anna Ancher died in Skagen, on 15th April 1935. In 1967, Michael and Anna Ancher’s house (Anchers Hus) in Skagen was converted into a museum, open to the public for tours.

Exhibitions and awards
1893 – she exhibited her work at the Palace of Fine Arts at the World’s Columbian Exposition in Chicago;
1913 – the Ingenio et Arti medal;
1924 – the Tagea Brandt Rejselegat.
2018 – included in the exhibit Women in Paris 1850-1900.
2004 – Anna and her husband Michael Ancher were featured on the front side of the Denmark’s 1000kr bill, which has now been replaced.
Her works often represent Danish art abroad. 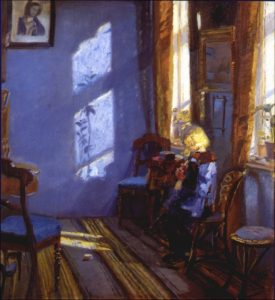 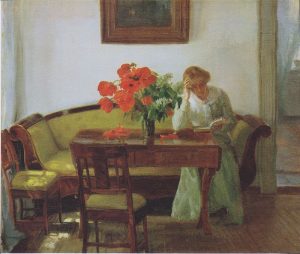 The reading Woman is the pianist and music teacher Lizzy Hohlenberg. 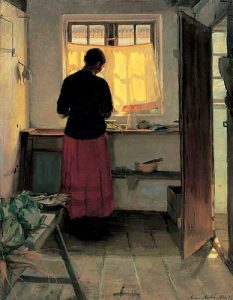 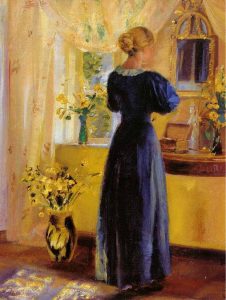 Girl in fron of a mirror, 1899
oil on canvas
The Hirschsprung Collection, Copenhagen, Denmark